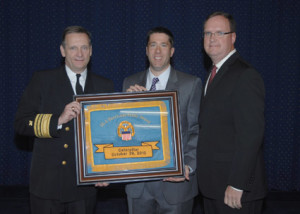 The Defense Logistics Agency (DLA), which is part of the U.S. Department of Defense, honored Caterpillar and a number of other companies with the Hurricane Sandy Award at a ceremony in Fort Belvoir, Virginia, on October 29. Accepting the award on behalf of Caterpillar were Jason Weber and Jeff Spencer, account managers in Defense & Federal Products, which is a business unit within the Diversified Products Division. Caterpillar was awarded the honor for providing “unprecedented support during the Hurricane Sandy relief efforts by ensuring generators and accessories were always available in a timely manner that exceeded expectations.“

Just one year earlier on October 29, 2012, Hurricane Sandy hit multiple states in the northeastern U.S., causing massive flooding, destruction and power outages. But thanks to the support of private companies like Caterpillar, the DLA was able to provide critical supplies and services ranging from food and fuel to generators and bulk debris removal following the storm.

Defense & Federal Products (D&FP) coordinated the delivery of about 130 generator sets by individually contacting dealers across the United States. With most of the available generator sets on the east coast already being moved to the disaster scene, D&FP personnel were able to secure inventory from 14 dealers stretching about 2,500 miles from the state of West Virginia in the east to Washington state along the west coast.

“I am very proud of the response given by the D&FP team and the Cat dealer network in support of the DLA during that time of crisis,” said Jeff Anderson, D&FP Engine Product Division Manager. “I additionally commend Cat dealers HO Penn, Foley and Ransome for their professionalism, commitment and support on the ground in the affected areas. The overall team effort of Caterpillar, our suppliers and dealers from across the U.S. is unparalleled and indicative of the quality of our people.“

“In addition, the hard work and commitment of countless Cat dealers and employees of the Electric Power Division resulted in the delivery of more than 1,400 generator sets, or 1.1 gigawatts of power, to people in need following Hurricane Sandy,” added Rick Rathe, global manager, Cat Rental Power. “Whether it’s Hurricane Sandy or most recently the typhoon in the Philippines or tornadoes near Peoria, we always stand ready to support should the need arise.“

Caterpillar Chairman and CEO Doug Oberhelman added, “We worked closely with our dealers and suppliers who provided tireless support to mobilize equipment to where it was most needed. They responded directly to customer demand or sent equipment, personnel and other resources in support of the recovery effort. In addition, two organizations supported by the Caterpillar Foundation – First Response Team of America and the American Red Cross – helped clear debris and provided immediate support for the equipment and volunteers in the storm’s aftermath. We are proud to have played a role in the recovery efforts of Hurricane Sandto read more about