On the evening of October 29, 2012, Superstorm Sandy made landfall, severely impacting New York City and the Jersey Shore. While most of the area’s infrastructure was overwhelmed, a wastewater treatment facility in Elizabeth, N.J., about five miles south of Newark, didn’t miss a beat. Despite an unprecedented storm surge more than 10 feet above normal, the Joint Meeting of Essex & Union Counties plant was able to treat all of the raw sewage that entered the facility during the storm period. Not a single treatment tank overflowed, even though waters from the nearby Elizabeth River and the Arthur Kill saltwater channel began flowing into some of the tanks.

Although there was an outage of utility power lasting several days, the treatment facility continued to operate on electrical power produced by its own onsite cogeneration facility. As a result, the Joint Meeting facility never shut down. While other wastewater treatment plants in New York and New Jersey weren’t as fortunate, there were no discharge permit violations that occurred during or after the passage of the storm at Joint Meeting. “We elected to use natural gas as long as it was available, and then switch over to methane gas from our digesters in the event that the brunt of the storm hit us,” recalls Joe Bonaccorso, the former superintendent of the plant who now serves as a dedicated consultant with CME Associates. “That enabled us to stay online from about midnight on October 29, a Monday, until mid-afternoon Friday, five days later.” The devastation from Sandy focused public attention on the reliability of transportation, electrical and waste management infrastructure.

A report by Climate Central highlights the severity of wastewater infrastructure failures. Of the nine states affected by Sandy, New York and New Jersey were the hardest hit, accounting for nearly 93 percent (10.3 billion gallons) of the total volume of sewage released. One third of the overflows released raw, untreated wastewater into rivers, streams, and coastal waters. “We serve a large combined population of more than 500,000,” says Francis Bonaccorso, an assistant superintendent at the Joint Meeting plant. “Our job is to maintain the infrastructure that keeps the environment secure, treats water, and provides uninterrupted service to the population.”

Self-sufficient power
The cogeneration plant, which came online in September 2009, is powered by three Cat® G3516 generator sets that run on either pipeline natural gas, or methane gas that comes from two large anaerobic digesters. A fourth G3516 generator serves as standby power when one of the others is shut down for scheduled maintenance. As part of its wastewater treatment process, Joint Meeting derives methane from sludge that is pumped into the mesophillic anaerobic digesters. The methane is used as fuel to run the generator sets—along with alternating use of natural gas—and the result is 2.4 MW of power. That output provides 92 percent of the power required to run the wastewater plant portion of the facility, and 80 percent of the power for the entire facility.

In the mid 2000s, Joint Meeting officials made a critical decision after consulting with their Cat dealer, Foley Power Systems, that would ultimately prove to be the right one. At the time, Joint Meeting was having issues with the reliability of the utility power that was serving the facility, such as power cables that would fail in the wintertime or during heavy rainstorms, resulting in a loss of power to the plant. New Jersey environmental regulators were about to impose heavy fines and require the installation of a large standby generator. “We were not comfortable with that, because standby generators would just sit there until we needed them,” Joe Bonaccorso says. “So we decided to counter their requirement with a cogeneration system that, in effect made the public utility our standby source of power.”

$2.2 million annual savings
Prior to installation of the Cat gensets, Joint Meeting had a very small cogeneration system, including boilers used to heat the digesters that produced the methane gas. Any excess gas was flared. Now, six years later, the cogeneration plant is using all of the gas, saving Joint Meeting $2.2 million annually in electric power it would otherwise purchase from the grid, says executive director Samuel McGhee. “It’s a savings for the rate payers of our 11 member municipalities and the City of Elizabeth,” McGhee says. “And it certainly reduces the assessment that they pay to run the facility.” When it built the cogeneration facility, Joint Meeting received an $885,000 incentive from the State of New Jersey Clean Energy Program. Including construction costs and engineering, the Joint Meeting cogen plant cost $18 million. Based on the anticipated energy savings, the investment in the cogeneration facility was expected to be recovered in 16 or 17 years. But with performance improvements and resulting gains, plus increases in bypassed utility costs, that payback period has been reduced to nine years. “Our public utility would be charging us 10.2 cents per kilowatt hour, and we’ve calculated that it costs us about 3.2 cents per kilowatt hour to produce the power,” Joe Bonaccorso says. “That includes maintenance costs, natural gas, and some of the chemicals that are needed to treat the fuel gas from the digesters. “We have three more years to go, and that mortgage is paid,” he adds. “It has proven to be a very good investment for the Joint Meeting.” As an added bonus, waste heat from the generator sets is captured and used to provide heating to the Joint Meeting facility, as well as maintaining the optimum temperature (95° F) in the digesters for producing methane. When it came to sizing the cogeneration system, there were multiple motors for mixing, large motors for pumping, and large pumps for return activated sludge—all of which require power to operate. Joint Meeting was also looking for black start capability, meaning that if the facility was without utility power, it had to be able to energize auxiliary systems that start the cogen system. It also had to be able to operate in island mode, totally separate from the public utility system. “That became a little bit of a problem when we were first starting up, because we neglected to take into account the incoming current from the transformers on the site,” Joe Bonaccorso says. “Once the system was online, it was adequate to power everything up. Initially we were black starting all the transformers on the site because they instantaneously required power. “So there were a lot of adjustments that had to be made, and fortunately Foley Power Systems helped us through those situations. They involved very complex relay settings under permissive settings that had to be adjusted in order for the generators to be able to come up to speed and power up the  transformers,” he continues. “Then we could start the motors up one at a time without creating a power load that was too high.”

The cogeneration facility includes a digester gas pretreatment system to remove hydrogen sulfide gas, moisture and siloxane compounds. In the treatment process, the digester gas first goes through an iron sponge that removes the hydrogen sulfide gas, which if allowed to flow to the engines could condense inside and result in corrosion. The moisture is removed by running the gas through a chiller system after the iron sponge. From there, the treated gas is put through an activated carbon system to remove siloxanes, which are commonly found in health and beauty products, and can generate an abrasive silica-like compound inside the engine, potentially damaging the valves and the pistons. 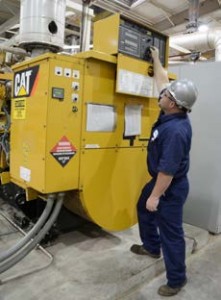 “When it came to the design of the pretreatment system, Foley Power Systems again provided expert assistance to ensure that we were going to reduce hydrogen sulfide, and especially siloxanes, to levels that would not harm the performance of the engines,” says facility superintendent Steve Dowhan. Uptime with the Cat gas engines has been very good, Dowhan says, adding: “The G3516s have proven to be very reliable—it’s clear that we made the right choice.” Now, three years after the landmark storm, Joint Meeting officials are considering the addition of two more generator sets to power another one of its facilities. After the experience with Sandy, Joint Meeting knows it has a partner it can rely on in Foley Power Systems. Foley technicians work side-by-side with Joint Meeting staff when they travel to the plant to service the equipment, Fran Bonaccorso says. “We learn from Foley,” he says. “So it’s more of a relationship rather than a service call. They come right away when we call, and they do a great job.” Regardless of what happens in the future, the successful operation of the plant without incurring any permit violations during Sandy remains a badge of honor for the century-old facility. “Without the cogeneration facility provided to us by Foley Cat, we would not have been able to do that,” Fran Bonaccorso says. “When everyone else was dark, we were light. We had power and operating pumps. “We were able to do the jobs that others weren’t able to do when the storms hit, and it was due in no small part to the performance of the Cat gensets, and the timely support we received from Foley Power Systems.”