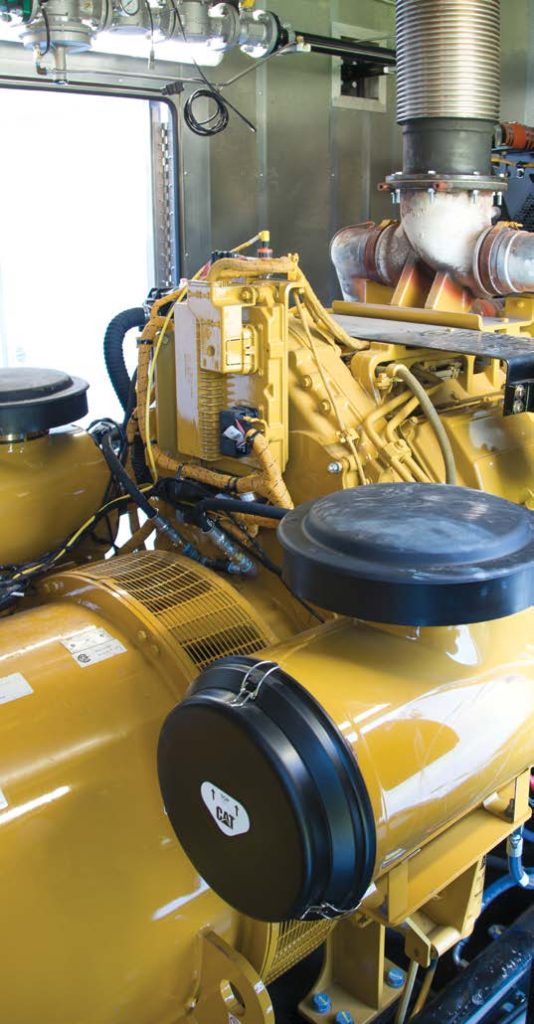 Five years after it devastated the East Coast, the impact from Superstorm Sandy is still reverberating in the greater New York-New Jersey metro area. For the City of Linden, New Jersey— a municipality 13 miles southwest of Manhattan with a population of more than 40,000—the storm underlined the need for a new source of emergency power.

“Immediately after Sandy hit, we were down for the better part of two weeks—for about 10 days we were 100 percent without grid power,” recalls Al MacDonald, director of public property and community services for the City of Linden.

“So we relied on a generator that dates back to the 1970s that was only for emergency power in the building and our 911 call center,” MacDonald said. “Our electrician was running around putting in smaller generators just to get other offices up and running, and it was just not a feasible situation.”

Linden’s city hall building houses the police department, municipal court, the tax and treasury offices, along with engineering and the mayor ’s office. It also houses the 911 dispatch center, and is the central location for most of the servers for the city’s computer system.

“It was obvious that city hall had a generator issue because of its age and what it lacked in power,” MacDonald says. “We’ve had interruptions in the past, and fortunately we were pretty lucky with that old generator. We didn’t lose the critical systems like 911 dispatch and our computer system, but everything else pretty much came to a standstill at city hall.”

City officials discussed getting a new generator as far back as 1999, but budget constraints and other priorities kept them from taking action until recently. The experience gained from going through Superstorm Sandy was the catalyst that prompted Linden officials to take action, MacDonald said.

Dual fuel option
Based on the recommendation of engineering firm CME Associates, this spring the City of Linden opted to install a Cat® C27 generator set equipped with bi-fuel technology that enables the genset to run on both diesel and gas fuel.

“We felt that it would be economically advantageous to have a bi-fuel generator with the capability to provide power during emergency utility outages, as well as for non-emergency purposes,” MacDonald said. “Our environmental consultant, Greener By Design, advised us that a bi-fuel generator with emissions controls would provide flexibility to participate in non-emergency energy market applications such as demand response, as well as mitigate risks related to diesel fuel delivery that had been an issue in the past.”

Demand response helps to relieve stress on the utility grid by incenting customers to reduce utility power consumption. During times of peak
demand, such as hot summer days, demand can exceed generating capacity from the utility.

When a demand reduction request is signaled, the customer may adjust power demand by postponing some tasks that require large amounts of electric power, or may decide to pay a higher price for their electricity. Some customers may switch part of their consumption to alternate
sources, such as on-site power generation.

“Our research showed other facilities that have done a similar setup have offset their costs tremendously over a long period of time,” MacDonald said. “By participating in the energy market programs during times of peak usage, we anticipate recovering our cost over the long term.” 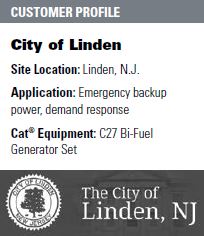 In the wake of Sandy, which knocked out the utility grid for anywhere from five to 10 days in the New York metropolitan area, scores of backup diesel generator sets ran out of fuel, their users unable to receive another shipment of fuel due to blocked roads and delays at terminals.

Foley Power Systems in Piscataway, N.J., provided the City of Linden with the Cat gensets. “During events like Sandy where they were down for 10 days, a bi-fuel system equipped with a multi-day tank of diesel fuel could have provided them full-time emergency power without having to fill the diesel fuel more than once,” said Scott Yappen, Director of Business Development with Foley Power Systems. “So this bi-fuel solution should keep the City of Linden run ready for decades to come.”

Because Linden intends to use the generator in emergency and non-emergency modes, the municipality is required to have emissions exhaust
reduction equipment in order to comply with environmental regulations. This was accomplished by mounting a Selective Catalytic Reduction (SCR) system on the roof of the generator enclosure. 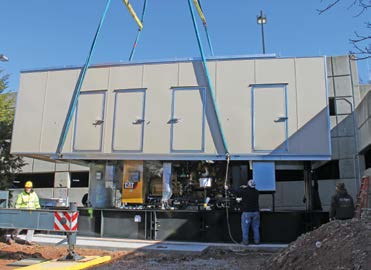 The Cat generator is located outdoors in a sound-attenuated enclosure behind the municipal garage, and faces a residential area. “We were concerned about the level of noise from a generator of this size, especially if we are running in the middle of the day,” MacDonald said. A third party contracted through Foley Power Systems provided a sound-attenuated enclosure, which more than meets the local noise standard and will be sufficiently quiet such that the neighbors won’t be bothered when the generator runs.

Co-op purchasing
The city was able to save time and money—plus get a quality piece of equipment—by utilizing National Joint Powers Alliance (NJPA) cooperative purchasing. As a national municipal contracting agency, NJPA is a public agency serving nearly 50,000 member agencies across the country. NJPA establishes and provides nationally leveraged and competitively solicited purchasing contracts from industry-leading vendors.
These cooperative contracts offer both time and money savings for their users by consolidating the efforts of numerous individually prepared solicitations into one national, cooperatively shared process.

“The bidding process with a municipality or any other government agency is lengthy, and you don’t always get exactly what you originally specify,” MacDonald said. “So if you don’t go over the bid with a fine-tooth comb, you can potentially wind up with some issues, and we have had some experience with that in the past from other vendors.

“With NJPA, the bidding is already done for you so you know that you’re getting the best price for the piece of equipment that you spec out and that you want,” he said. “So not only did we get the best price, we got exactly what we specified.”

The City of Linden will rely on Foley Power Systems to maintain the C27 genset through a Customer Support Agreement. “I think that’s the way to go for a very small amount of money,” MacDonald says. “For a piece of equipment this critical to the continued operation of vital city systems and departments, it would have been foolish for us to not go with a maintenance agreement.”

While the City of Linden has had a mutually beneficial relationship with Foley in procuring and maintaining Cat construction equipment, this was their first experience with Foley Power Systems. “They’ve been on top of the entire project from front to back,” MacDonald said. “They facilitated the interconnection with the electric utility—which required a lot of coordination— and also with the gas utility. “We’ve really had to do very little as far as the municipality is concerned other than just provide basic assistance. “We’re more than pleased with how the whole project has been handled.”