Each year Caterpillar’s Rental Power Operational Excellence Program recognizes Cat® dealership employees worldwide with the prestigious Bruce Stokdyk award.  This award celebrates those individuals who “inspire us all to do our very best every day.” 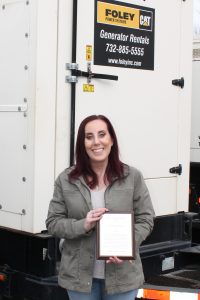 Congratulations to Laurie Benninger, Foley Power Systems Rental Sales Administrator, for winning the award this year.  Benninger has established herself as a consistent and reliable Rental Coordinator across the Cat Rental Network.

She was nominated by John Holland, Foley Power Systems Rental/ Used Equipment Manager, who said, “It was during the 2017 Hurricane season that Laurie demonstrated her true dedication and compassion for her work. First came Hurricane Harvey and Hurricane Irma, followed by Hurricanes Jose and Maria. Foley, Incorporated is the generator source for Caterpillar Defense, which has the FEMA contract. Beginning on August 28th, 2017, Laurie and the team started supporting generator requirements.  In addition to the 350 generators supplied for FEMA in Puerto Rico, Laurie has continued to support normal business for the past year and a half. She has worked closely with over 30 Caterpillar dealers throughout this unprecedented catastrophe. Laurie opened every work order, coded and reviewed every bill and continues to do so as of today.”

Thank you Laurie for being a dedicated and reliable resource for Foley, Incorporated, and its customers. Please join us in congratulating her on this achievement.